Almost immediately upon confirming my pregnancy, I knew I wasn’t going to parent my son – that I would place him for adoption. Which sounds good, in theory, but how the hell does one go about actually finding parents for a baby, as yet unborn?

I confided in my manager at Lehman Brothers, and she told me that a woman in an adjacent department had recently adopted her baby from a New York City agency. She offered to get me the details. The next day, she had a name and a phone number for me. I should call Judy Greene, the birthparent coordinator at the Spence-Chapin agency, located on New York City’s Upper East Side.

I worked up my nerve to call Judy, and she was very kind. She asked me lots of questions, seemed gracious and concerned without being overly solicitous. The day after that, I received a phone call from the woman who would become my social worker, Mary Weidenborner. I was stunned when Mary repeated back to me, virtually word for word, the things I had told Judy I thought I was looking for in prospective adoptive parents. To this day, I don’t know if Judy took shorthand, recorded our call, or has a photographic memory.

Judy knew her stuff, because Mary was the perfect fit for Tony and me as a birthparent counselor. Thing is, I’m not sure how she divined that, because I hadn’t revealed all that many details about us. Mary was the mother of boys, a baseball fan, and a card player. We were both baseball fans, and Tony was, at least back then, a Black Jack player extraordinaire. Tournament-winning good. Now to say he was reticent to be involved in the adoption is putting it mildly. Mary knew that, and did what she could to engage him. Nevertheless, on more than one occasion, he referred to Spence-Chapin as “the baby sellers.” This from the man who wanted me to have an abortion. But, to his credit, he went with me to the first six or seven meetings with Mary.

They told me that the average prospective birthmother sees her social worker four or five times. I saw Mary 21 times before Eric was born and 12 times after. I don’t recall very much of what we talked about during all of those sessions. I just know that talking –  and talking and talking and talking – helped me work through all the feelings, some of which were extremely difficult to put into words. Mary understood, though, because like Judy, she was very good at her job.

Growing up a reader and having earned a creative writing degree, I have always turned to books as a staple of my education on any topic – even in the internet/information age. On learning I was pregnant, I remember looking for a book about adoption that was geared at birthmothers. There was virtually nothing. Perhaps one memoir – a birthmother sharing her harrowing ordeal. And The Primal Wound – a super comforting book about how traumatic adoption is on the baby removed from his/her birthmother at birth. Other than that, the Barnes & Noble shelves were littered with books offering info on the inside track to adopting a baby – cheat sheets, if you will, all but promising gullible parents that THIS book would teach them the secrets that would guarantee an easy and flawless adoption. Liars all of them – as no such thing exists. Adoption is a human institution, and humans come ready made with flaws. Glitches happen – best thing is to set a goal to have a few as possible.

Since I had no books to turn to, I turned to the birthmothers I met at Spence-Chapin. I was invited to a birthmom support group meeting where I met Peggy, Lynn, Karen, Cathy, Alissa, and Cheryl. The first four had placed between 12 and 25 years ago. Alissa’s adoption was fairly new – her son was just 6 at the time I met her. Cheryl’s son was just 18 months older than Eric, so we seemed to share more similarities in our experience than any of the others. Meeting them all gave me hope – they’d all lived through their adoptions. While there was pain, they hadn’t died and had managed to come out on the other side. Peggy still stands clear in my memory. At the time I met her, her first daughter was in her 20s. She had been tiptoeing around a search for years, but as she’d subsequently had two other daughters with the man she’d married (not her first daughter’s birthfather) and none of them knew about her first pregnancy and the placement, she was hesitant to commit to a search. We all wondered how she had faked never having been pregnant before.

It was only after I’d placed my son that I learned about Patricia Roles’ book, Saying Goodbye to a Baby. I read it and wept because I could have used so much of that information while I was pregnant – although it was still helpful afterward. That was my biggest suggestion as part of Spence-Chapin’s Birthmother Advisory Board: give a copy of that book to every prospective birthmother who walks through the door. At the time I left the Tri-State Area, they were doing just that.

One thing Roles’ book touched on – which I later realized later that Mary had helped me navigate – was a thing called anticipatory grief. That’s what all of the talking was about. Knowing some hugely difficult feelings were headed toward me – an unavoidable emotional tsunami – if I intended to go through with the adoption, I could talk through a lot of them before they hit, so that when they did actually pummel me, they were somewhat softened because I had prepared for them in advance.

Once I placed my son with Kathy and Bruce, I was no longer a prospective birthmother, so I was able to join the support group. Peggy told me privately that she had hoped, that night she met me, that she’d never see me again. That was sweet – and also a wish though the lens of a birthmother who still had unresolved guilt and grief issues. At meeting after meeting, I would frustrate the other women because, while I could empathize with their guilt, I could not relate to it first-hand. “How can you not feel guilty?” they would demand to know.

“I’m not sure – I just don’t. If I’d felt guilty, I never would have done it.” I didn’t mean to be flip with my answer, but that was the honest truth. I wish I could have done the adoption without hurting Eric – but to this day, I’ve never quite felt guilty about it.

I think part of the absolution of guilt might have come from Father Bede Wilks, a 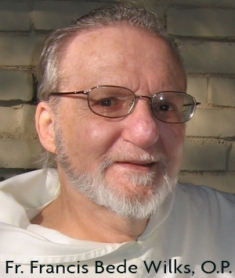 Dominican priest on staff at the UA Newman Center while I was in college there. For a brief time one semester, I made a practice of attending daily Mass. It was during one of those weekday services that Fr. Bede gave a sermon about the emotions of guilt and anger. “Guilt,” I very clearly remember him saying, “is from the devil. It is a useless emotion.” Now paraphrasing, he continued, “It ties you up in knots, paralyzes you, and makes you feel terrible. But it’s not helpful. Nothing productive ever comes from guilt. Anger, on the other hand, can be a very positive emotion, because anger can motivate you to change things.” I’ve since come to learn that anger, unchanneled, is also destructive – perhaps deadly.

I’m not sure Fr. Bede’s sermon was a magic wand, per se, but I know that I never viewed – or practiced – guilt the same way again. Without judging other women’s choices, I know that I did everything I needed to do to be OK with the adoption – and I’ve been fairly well adjusted about it from the beginning. Many birthmothers are not as fortunate.