Recently John and I bought bikes. We were actually walking – an amazing number of people walk in our new neighborhood – to get pizza at a nearby restaurant and happened by a bike shop. I’d been mentioning wanting to get a bike, so he asked me if we wanted to stop and look around. So we stopped and looked around, and came home with two bikes. They’re nice, as bikes go, particularly for people like us who are not bike people – yet. We got all the accoutrements to go with them: helmets, locks, water bottles, water bottle holders (called cages, if you want to use proper cycling parlance), tire liners, and a rack for the back of the SUV so we can take them with us on an upcoming trip to Los Angeles.

On our first ride together through the neighborhood, we saw other bike people who had their bikes hanging on U hooks (or maybe they were S hooks) from the ceiling of their garage – right ABOVE their cars. What a marvelous space-saving idea! When our handyman came to do some more awesome work on our house (really – find and call Home Rehab AZ if you need handyman work in the greater Phoenix area!), we had him install similar hooks on our garage ceiling. Now we even look like bike people when we’re not riding our bikes!

In all seriousness, we’ve been working on getting in shape for a while now. John’s a lot

more diligent than I’ve been lately, hiking an average of about 4 miles a day just about every day. We also work out with our trainer twice a week. And I’ve recently committed to walking a minimum of 10 miles a week. So the bikes are icing on the cake, really.

Except that I’ve never been all that athletic, or that big of a fan of exercise. Volleyball my freshman year in high school and a weird city league for a season with some coworkers from Lehman Bros. when I lived in the Tri-State Area. A little softball from about 5th grade through freshman year. The longest distance I ever ran was about 5 miles, back during my first stint with a trainer, about 15 years ago. The fact that I bought a bike (and boxing gloves, but that’s for another post) perhaps means I seem to be voluntarily getting into this whole exercise/fitness/sportiness thing.

I’ve had bikes for most of my life, just never ridden consistently. In fact, I won a 10-speed bike in the third grade, selling raffle tickets for the school carnival. My aunt walked with me, door to door, encouraging me every step of the way. She was handicapped her whole life as a result of an accident that happened when she was about 3 years old. She was also married to a couple of very abusive men. And yet she was one of the pluckiest, most inspiring woman I’ve ever met. She made me feel like I could do anything if I put my mind to it. It was about three years before I could ride that bike, but it was a proud three years.

People who try to convince you how easy something is to do sometimes say “It’s like riding a bike.” The gist is that you’ll remember how to do this momentarily difficult thing because your body already knows the movements. And riding a bike really isn’t all that difficult, in the short term. But I watch these cyclists who appear seemingly everywhere within about a 5-mile radius of our home, and I think I could never do that. These are guys (they seem to be mostly men) who probably ride many miles daily. John did offer to buy me cycling shorts and a jersey when we got the bikes, but I declined. It’s not the gear – it’s the seriousness, the near-total focus it would take to get to be that good. I think the same thing when I see great swing dancing teams or CrossFit competitors. I’d love to be able to do it, but only if it didn’t take every waking moment to get there.

My biking will be casual for now – for exercise, transportation, and a bit of fun.

Here’s what happened when I headed out tonight to get that bit of exercise. I thought I’d ride around, check out another part of this new neighborhood of ours. I told my husband I’d be home within 45 minutes. Everything was going so well, until I wound up on one street, thinking it was a different street a mile in the opposite direction. How the hell did I get here? So I backtracked and headed home – or so I thought. Until I wound up on that same street a second time. These lovely maps will illustrate the story better than my words can explain it. I had to laugh out loud at one point, because I felt like Billy from the Family Circus comic strip.

The keen observer will notice that my plan doesn’t take into account the fact that there are no through streets at the point I thought I would turn and head East. 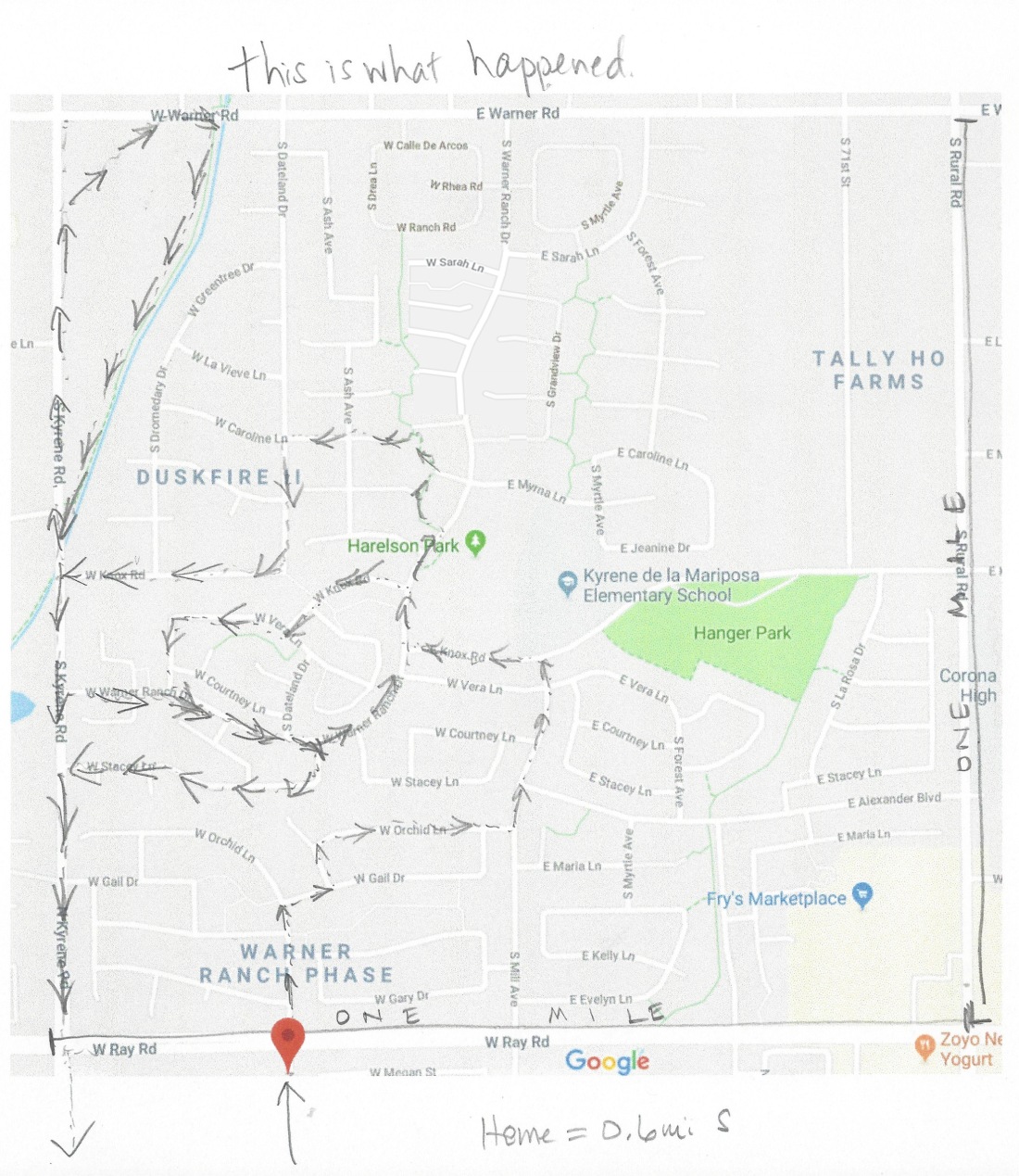 Then I got home, thinking, Well, at least the speedometer I installed on my phone will tell me how far I went. Turns out, the speedometer only works when you turn it on.

The reading at the end of my ride…

Things don’t always go as planned. My son is living, breathing proof of that. And sometimes I am reminded of this fact more often and more inelegantly than I’d prefer to be. Eric’s birthfather was a jackass in a lot of ways, but he was a great travel companion. For one thing, he’s an amazing map reader. And even if we did somehow manage to get lost, it never really stressed him out. My husband, on the other hand, would prefer we drive directly there every time – wherever there is. Sometimes, though – inevitably, even – our journey is windy and unpredictable.

As far as I’m concerned, getting lost isn’t that big of a deal if you keep a few things in mind:

When’s the last time you got lost? Was it more terrible or wonderful? Share, if you like, in the comments below.