Making a Difference a Little at a Time

Teachers in Arizona and Colorado walked out on their jobs today, in demand of better pay for teachers and support staff, as well as improvements in learning conditions for their students. You may have an opinion on the strike as a tool to accomplish such a goal and the politics behind it. I was once of the opinion that our deficit in education is the most crucial of all social ills, because everything else (homelessness, addictions issues, obesity, and teen pregnancy come to mind) can be addressed if education is done properly. However, as I see it today, two of the most significant problems with education will not be solved with this strike or any others like it. First, we need to stop teaching students according to their chronological age and instead teach according to their ability (and willingness?) to learn. Secondly, we need to teach our youth not WHAT to think, but instead HOW to think. I’m certain some would disagree with me on Issue #1 (“But little Joey’s feelings would be hurt if he were 12 years of age but had to study math with 7-year-olds”), and we’re so far down the rabbit hole on Issue #2, in terms of the way we do education in America, that it would take a seismic shift to move us even remotely in another direction.

While I still feel education – and all the other topics mentioned above – are of vast importance, a different one now stays top of mind for me. It’s the subject on which I post and repost most often on Facebook. On his podcast today, comedian Bill Burr noted that this subject is the single most important issue to millennials: the environment. Hear, hear! In case you are (or have been) wondering, millennials are described as kids born between 1982 and 2002. Born in 1995, my son falls right smack in the middle, there. And I worry often for the state of the planet we are leaving to him and his children. My husband’s niece will be 10 in June, and Eric’s sister is pregnant right now with her first child. What will the world be like by the time that baby gets to be my son’s age? Pretty unpleasant if we don’t start doing something immediately to right the sinking ship that is our home planet.

Sounds kind of hopeless when you hear those big problems listed out like that, but Mother Nature is nothing if not resilient. However, we all need to do our part, and we need to start today. Even small things count, because they add up when each of us begins to do more of them. One thing I’ve noticed, in particular in Arizona, is the number of people who get into their cars and let the engines run while they check their phones, sometimes for minutes that run into the double digits. This is an easy habit to fall into, especially in the crazy summer heat here. But if we pay attention and stand in the shade (or remain inside the store or office building) we don’t have to idle our engines and pump all that extra carbon monoxide into the air.

One thing my husband is getting much better at these days is taking reusable grocery bags to the store. Sometimes we forget them at home, but my personal policy is never to request a bag if I have 3 items or fewer – and often I will juggle many more than that to avoid bringing home another plastic bag. Think it can’t possibly matter whether you use one less bag a week? Did you know that an estimated one million birds, 100,000 turtles, and countless other sea animals die each year from ingesting plastic? Even if you throw those bags away in a trash can, garbage is regularly being dumped (legally and illegally) into the ocean – so your plastic might just go and sit there for 15 to 1,000 years – or until an unsuspecting creature eats it for dinner. If you are a bit crafty and you’d like a tip or two on making your own reusable bags, this video may help. We also recycle just about everything we can: paper bags, toilet and paper towel rolls, plastic bottles, all manner of cans, Styrofoam, and plastic bags (both the grocery variety and others). 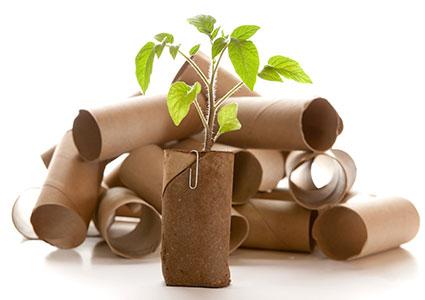 John a has also recently made the decision to stop eating all mammals – which leaves him seafood and fowl, in terms of animal proteins. This is also another huge step in the way of helping the environment, because factory farming is one of the biggest causes of pollution on the planet. I have not yet given up meat to the same degree – nor do I promise that I ever will – but we do consume a lot less meat these days than we used to, and I’m OK with that. 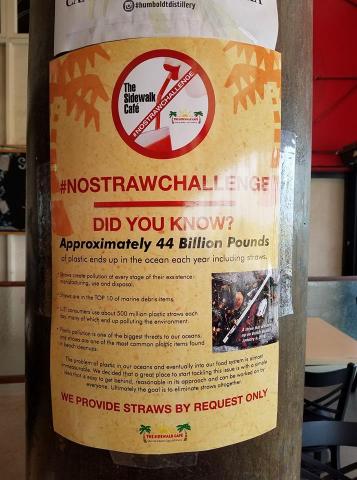 plastic drinking implements that are actually wholly unnecessary, in terms of our ability to consume most liquids. As the 1MillionWomen.com website points out, we use the things for roughly 20 minutes at a rate of 500 MILLION a day and then throw them away – and then, they NEVER break down or decompose. A quick internet search will reveal heartbreaking images of animals that tried to eat the because in the ocean (WHY do they end up in the ocean, again?) they look like food. The Sidewalk Cafe, a restaurant where we dined recently in Venice Beach, had actually posted signs explaining why they serve straws only upon request – and challenging patrons to take the #NoStrawChallenge.

I know these are small details, but the average American household throws away 10 plastic bags per week. Picture it, if you can. If every one of those houses used just one less bag per week, that would be 125 MILLION fewer bags discarded a week. Or six-and-a-half BILLION bags in a year. Just for using one less bag a week. Now add in recycling the things, and we’re really starting to make a difference, right?

I have no idea what my son’s family’s total recycling habits are – but if I recall our last visit this past December, they definitely had a recycling bin that went out separate from the landfill trash. These are habits I would have passed down to him, had he grown up in my house. My hope is still to one day have these conversations with him, if only to learn his perspectives about the things that are important to me. And if his generation is making the environment its number one priority, maybe there’s hope for us yet.

Things you can do…