Are You Living with a Serial Killer? 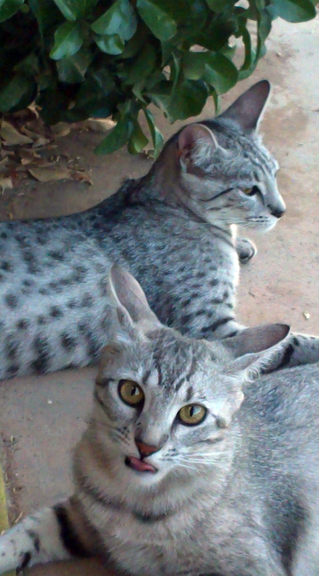 Perhaps you can relate. She was so cute when we brought her home – a twin actually. Her sister, Iris, the REALLY pretty one, went missing at about 18 months. We figure someone scooped her up because she was so exotic looking. Isis rebounded, though, and became one of the friendliest cats I’ve ever known. She walks with us when we take the dogs out – and even though we’ve been in our new house for going on four months now, it’s not unusual for someone in the neighborhood to comment on how remarkable it is for the cat to walk with us, “just like a dog.”

One way she’s not “just like a dog” is that the dogs have never gifted us with dead animals they bring in through the dog door. Or worse, living animals that she massacres on MY side of the bedroom. In our old house, her killing room was the guest bathroom. Gross enough, but I would have John clean up the seeds and bird gut gifts left behind after Isis’ occasional morning feast. Now, though, I have to go to bed with a flashlight to make sure I’m not stepping into a gruesome pile of slimy innards. Some people who live in the desert deal with scorpions in their shoes. We deal with dead birds. I’m pretty sure I’d opt for the scorpions, if given the choice.

Our pretty little menace started slow here, killing one bird on the other side of our back fence within the first two or three days of our living here. Then, we didn’t see any evidence of bird assassinations for another couple months. Now, though, she’s got the taste again. And so she brings them in with some regularity. It’s not like the experts try to tell you – a gift for her people – because all that’s usually left when she’s completely done, literally, are a few seeds from the bird’s gullet and a little pile of feathers. Oh, and the occasional blood smear. The problem is that she’s not always completely done – perhaps she gets interrupted, mid-feast?

The gifts she actually does leave are usually a lot less disgusting, albeit kind of annoying

after a while. When she’s not killing birds, our cat is apparently the self-appointed trash monitor for the Gila Springs Neighborhood Association. She brings in every kind of trash you can imagine. The best was a Guns ’N Roses iron-on patch, but she’s brought us everything from multiple seed packets (I can just see that neighbor thinking he’s going nuts – “I KNOW I left those seeds here on that table last night…”) to Doritos wrappers to homework assignments (“No, really, the cat ate my homework!”) to unpaid bills.

Once in a while, she’ll bring a bird in live. If they make it that far intact, we can almost always rescue the birds. The other day, she brought in a baby pigeon who lived to tell. After I surprised Isis into dropping the bird from her mouth, I scooped her up, hurtled her out the bedroom door, and slammed it shut. Meanwhile, the bird took flight and alighted on the built in shelf that edges the upper walls in our bedroom. Usually when the birds find themselves inside, if I can get them away from the cat, I toss a towel over them and take them back outside. This bird wasn’t in the mood to be draped. Just as I was getting ready to climb a ladder and try again, John picked up a pair of boxers from his laundry basket, wadded them up, and threw them at the bird. I didn’t think it would work, as I had already tossed two flipflops at it, and it had remained unflappable. Must have been the flow of the fabric as the boxers unballed themselves, because the bird panicked and began flying around the room, eventually finding its way out the open glass patio door.

First rescue in the new house. Isis’ record for bringing them in was three in one night at our old house.

To be fair, some of the birds gang up on her when we walk, dive-bombing her like a WWII pilot going after an enemy ship. If they knew they were going to be tomorrow night’s dinner, I’m betting they’d leave well enough alone. Or maybe it’s the other way around, and they’re paying her back for taking out Grandpa Tweety last week. Sometimes, I just can’t defend my feline’s actions, though.

I was walking the dogs the other night, Isis following dutifully behind me, when I saw a hobbled little bird a couple yards ahead of us. It was trying unsuccessfully to fly, and I knew it would be a goner if Isis got hold of it. I distracted the dogs and turned to head in the opposite direction – thought I had convinced Isis to come with us, too, when out of the corner of her eye, she saw the bird. And that was that. But you’ve never seen anyone run as fast as I did to get back home to shut the dog doors and block her personal cat door so Isis couldn’t bring her fresh kill into the house. I was just grateful this all unfolded pretty late at night.

One morning when Isis followed the dogs and me on our walk, a mom from the neighborhood was pushing her 2-year-old in his stroller. He saw the dogs and pointed and giggled – but when he saw the cat, his face lit up. I could see Isis choosing just that moment to attack a bird, and us getting sued for permanently traumatizing this child who was simply out for a stroll with Mommy. Thankfully, she got into her hunting crouch within the boy’s line of sight, but those birds were on their game that day and took off before Isis had a chance to pounce.

Turns out, my cat is pretty typical, however heinous you may find her crimes. According to a 2013 article in The New York Times, “…scientists from the Smithsonian Conservation Biology Institute and the Fish and Wildlife Service estimate that domestic cats in the United States … kill a median of 2.4 billion birds and 12.3 billion mammals a year… . More birds and mammals die at the mouths of cats, the report said, than from automobile strikes, pesticides and poisons, collisions with skyscrapers and windmills, and other so-called anthropogenic causes.” Good to know Isis is not carrying the weight of all this massacring alone.

In something of the “turnabout is fair play” nature of things, the dogs sometimes get feisty and chase poor Isis as she tries to come in one of the dog doors. Poor Isis, my sweet little bird-torturing cat. I was at the grocery store the other day buying cat food when the clerk commented on the delicious feast our cat was going to have. “Yeah, when she’s not murdering birds, she likes her cod pâté,” was my toss-off reply.

“Good luck with your mass murderer,” the clerk offered, as she handed me my canvas bag laden with canned cat food.

Oh my god, I thought, she’s right. We share our home with a serial killer.

14 thoughts on “Are You Living with a Serial Killer?”